The Team Is Back Together

It was all smiles last week when our 2021 National Recurve Squad met face to face for the first time in almost a year.

Luckily there were no border restrictions so our archers, coaches and support team could come together for a quality training camp hosted at Sydney Olympic Park Archers.

Currently, Australia has 3 male quota places for the Tokyo Olympic Games. The Australian Olympic Committee awarded the places to Taylor Worth, David Barnes and Ryan Tyack back in March 2020.

There are 3 women still going through the Olympic Trials process – Alice Ingley, Laura Paeglis and Melissa Spinocchia. Australia does not currently have a female quote spot for the Tokyo Olympic Games but are hoping to gain at least one spot, once World Archery finalise the amended quota allocation process going forward. When we know how many place female spots available, team selections will be finalised.

During the camp the team had a visit from Ian Chesterman AM, the Vice President of the Australian Olympic Committee and the Chef de Mission of the Australian Team for the 2020 Tokyo Olympic Games. He assured the team that the Tokyo Olympics would be going ahead, but with restrictions and health measures in place to keep all team members safe.

The camp started off with some 70m ranking rounds on Wednesday under the supervision of Australia’s Head Coach, Ya-Ping Shih.

Thursday and Friday, consisted of teams, mixed & individual matchplay to help get the athletes ready for the competition on the weekend. A year apart can impact the team’s cohesion so it was fantastic to see the athletes bonding, working together and supporting each other during the matches.

As an important part of their training, strength sessions were also thrown into the mix. Thanks to the NSW Institute of Sport and Precision Athletica for opening their gyms to our National squad.

We would also like to thank the National Development, Youth and Para archers for jumping into the matchplay to help create a more well-rounded competition simulation.

Keeping The Flame Alive was hosted by Sydney Olympic Park Archers and gave the athletes their first taste of matchplay in a competition environment in nearly a year.

Over 50 recurve, compound and barebow archers competed in the tournament, with many of the Paris24, Para and National Development squads making up the numbers.

SOPA is notorious for very windy conditions but the weather held out with little wind and lots of sun. You can find the full ranking list here.

The matchplay is where things started to get interesting with some close matches between the youth development athletes and national squad. Marcus Yiu (aged 14) and Ammrutha Vashetharan (aged 12) knocked out Ryan Tyack and Melissa Spinocchia, 6 to 4, early on.

David Barnes and Alice Ingley proved to be too strong for Taylor Worth and Laura Paeglis who they defeated, 6-2, for the gold medal.

Onto the individual matchplay on the Sunday, and the women’s semifinals were nail-biting to watch.   Youth archer, Ammrutha Vashetharan took Olympian Alice Ingley  to a one arrow shoot off. They both shot 9’s, with Ammrutha’s being 2 mm close to the centre of the target. Ammrutha faced Laura Paeglis in the gold medal match. Laura had a fantastic match and beat Ammrutha 7-1. Kim Lavender beat Alice Ingley  6-4 for the bronze.

The men finished the exact same way they ranked. Taylor Worth defeated Ryan Tyack 6-4 for the gold, while David Barnes defeated Pete Boukouvalas 6-0 for the bronze. 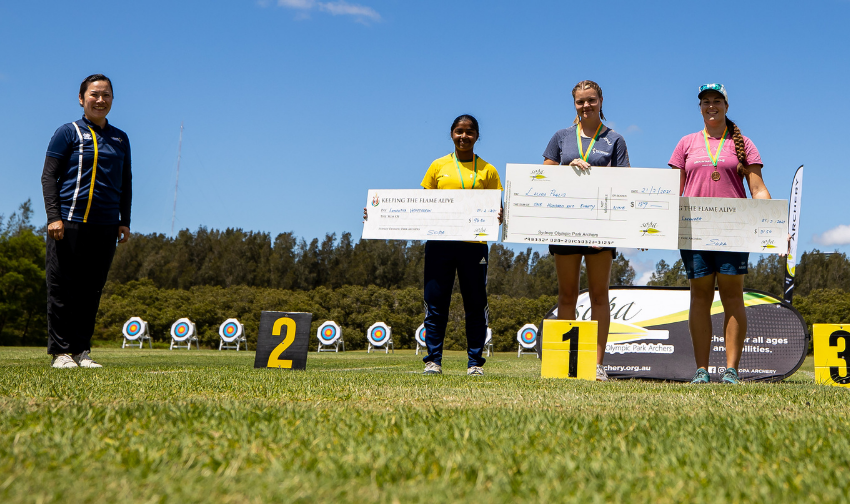 It was also fantastic to see many of the national para squad out in action over the weekend. There were  some close matches and it was great preparation for their Para Nationals coming up on 26 – 28th March.

Barebow archers also joined the fun and tried their hands at timed matchplay for the very first time. Well done to Scott Carter who took a dominating gold medal.

Keeping The Flame Alive worked as a great event to prepare archers for the 2021 Australian Open planned for 21 – 23rd May 2021 at SOPA.  Excitingly this year, the Open will include barebow for the first time.